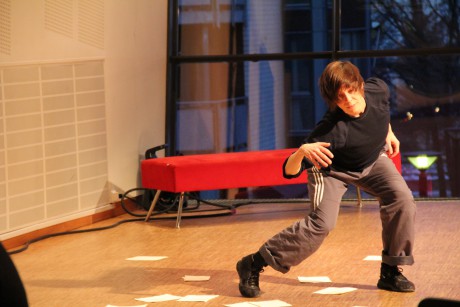 The keðja 2012 – 2015 Writing Movement activities revolved around strengthening of the critical discourse on and around dance. The activities included Labs on issues related to understanding and writing about dance as well as publishing activities and network building.

Competent and interested organisations and individuals in and around the contemporary dance scene connect and commit to stimulate the exchange and dissemination of texts and ideas in the Nordic and Baltic area, consequently developing sustainable conditions for dance discourse. The activities can be understood as a mobilization – of the resources that think, talk, read, and write dance, the idea being that a stronger discourse will benefit the development of the art form, as well as its dissemination and communication towards audiences. By involving local organisers allowing them to meet with counterparts in the field in neighbouring countries, we effectively target the local community of dance, critics, writers, academics, and strengthen both the local and cross-border relationships, build networks and exchange competency and resources.

Throughout the Nordic and Baltic countries contemporary dance finds a challenge when it comes to articulation of what ideas, aesthetics, values, methods and processes lie behind performance and other expressions of dance. The lack of a continuous critical examination and discussion about dance in its diverse cultural, social and aesthetic context hinders artistic development as well as the fields’ visibility and communication with the audience. The traditional role of the dance critic is today being challenged by a changing media situation. Dance writing is increasingly becoming an idealistic practice. Fees are minimal which makes it difficult to maintain and develop the general discourse as well as the quality in produced texts.

Dance Information Norway teamed up with committed organisations that hosted Labs, in the form of workshops, seminars or lectures. The Labs explored different ways of looking at and writing about dance, and produced new writing. They were open for and relevant to professionals like critics, dancers, choreographers, curators, researchers, teachers/pedagogues, arts managers, producers and others that work with dissemination and communication of dance and the performing arts as well as to audiences. Labs were in some cases linked to dance festivals or other local dance events.

A network consisting of the local hosts met regularly in connection to the local Labs or in the keðja Encounters. The network exchanged experiences from the local labs and worked with stimulating the publication of texts discussing dance, by engaging already existing publication channels like newspapers, academic press, journals, websites and blogs into the project. The network also reflected on the possibilities and challenges that digital and social media represent towards traditional criticism.

Via a call for ideas for articles, support for the production of new texts on dance was provided and 20 articles were published in relevant channels online and in print. Support for translation of the selected texts in to English was provided ensuring that the development of terminology in the local languages was stimulated and the texts provided with the possibility of a longer life span and a wider readership. Proceedings and documentation from the Labs, are published on the keðja website, on the websites of local hosts and other associates of the project as well as on the Writing Movement Blog.

– A more reflective, critical and continuous discourse on dance in its various manifestations.
– A Nordic Baltic network of dance writers/thinkers/makers; lasting and strong partnerships for organisations, institutions and individuals in the Nordic and Baltic region. Aug 2015 to June 2016 continued as the Writing Movement Network with support from The Nordic Culture Point.
– Empowerment, skills enhancement and visibility of existing dance writers and dance media.
– Published material, online and in print – for the benefit of professionals as well as audiences

The overall coordination of the lab activities, publishing and the network was co-ordinated by Dance Information Norway. The individual 8 labs were hosted and planned by the local host organisations and individuals.